New modelling from the Exporter Monitor produced by data group Coriolis Technologies and the Institute of Export & International Trade shows a pick up in January 2022 of the 12 month average for the number of businesses exporting from the UK compared to December 2021.

The Exporter Monitor also shows that, compared to December 2021, these businesses increased the numbers of people they employed and that their revenues were also higher.

Even so, the picture overall is mixed. As a result of the end of the transition period changing  the nature of goods and service movements between Great Britain and the EU so that they became exports, the Exporter Monitor data showed a near-doubling of the number of exporters, and accordingly, their revenues and their employees in February 2021.

We expect the challenges of continuing pandemic-related supply chain delays and the effect of the introduction of customs disclosures for EU importers into the UK to have worked through by the end of Q1 this year. However the average numbers of exporters, their employees and their revenues are still likely to be lower than they were at the end of Q1 in 2021 when record numbers of companies had just become exporters – some of those companies have since changed they way they operate and ceased to export themselves, although they may be using third parties.

“The data shows that UK exporters are still fragile from the joint shocks of pandemic-induced supply chain shortages and the aftermath of Brexit which caused so many companies to become exporters overnight. Worryingly, it is SME exporters that look most vulnerable in terms of future revenues and further financial support in the form of export guarantees and digital trade should focus on the requirements of these businesses.

Insitute of Export & International Trade director general, Mr. Marco Forgione said: “Exporters must be congratulated for navigating their way through what has been a year of many challenges. They, particularly those that are SMEs, need more support from Government, to access advice and training to deal with the uncertainty that they face right around the world. The Export Strategy is a good start but this needs to be prioritised right across Government. Looking forward, there is an opportunity in so many UK companies having been introduced to exporting this year. Once they are confident in exporting to Europe, and we believe that is increasingly the case, taking the next step, into global markets need not be so daunting.”

Figure 1: Counts of Exporters over time

NOTE: The data for Scotland, Wales and Northern Ireland are given in the Appendix

Wales and Northern Ireland have seen the biggest proportionate increase in the numbers of exporters post-Brexit. They have also appeared to be the most resilient with the declines less substantial since April last year than for Scotland or England.

Wales and Northern Ireland saw the number of employees in exporting businesses fall back in January 2022 by over 5% and nearly 1% respectively.

Revenues declined in all UK nations except England in January 2022 compared to December 2021. 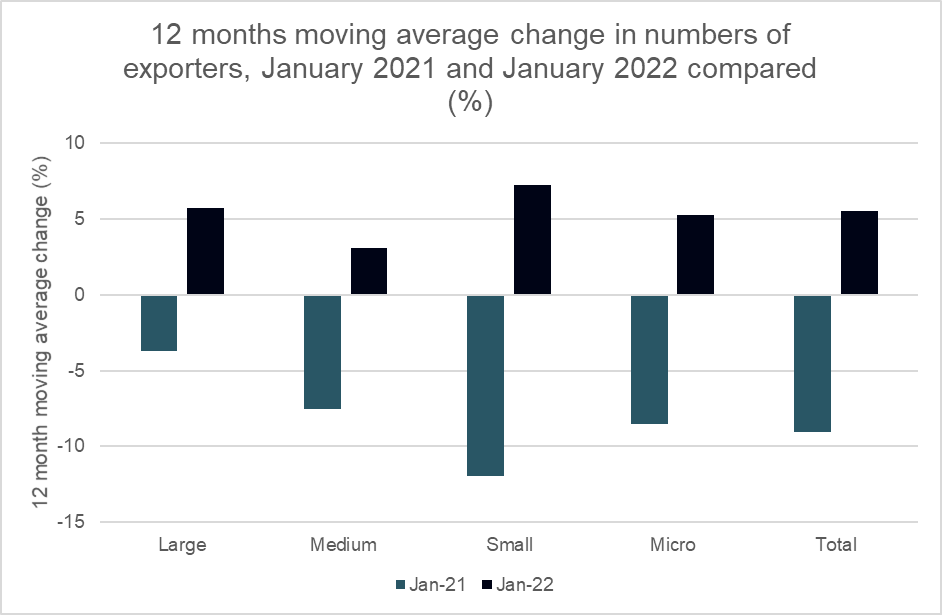 ArrowXL and Argos to deliver to main Scottish Islands