According to the latest UK Exporter Monitor by Coriolis Technologies and The Institute of Export & International Trade (IOE&IT), Northern Ireland (NI) exporter numbers increased more than any UK nation in the past month. However, these same exporters fared worse than their counterparts in other UK nations over July with revenues dropping by nearly 7% and employment by 4%.

Over the last year, according to the rate of change, NI’s exporters have suffered less than exporters in other nations (see appendix A-4). Although NI exporter activity has faltered from June to July particularly in revenue and employment, over the course of the year their overall momentum has outperformed all other UK nations in both number of exporters and employment. This suggests that despite the current headwinds from supply chain shortages and uncertainties around the NI protocol, they remain more resilient.

The total number of UK businesses exporting increased by 1% but revenues decreased by 2%.

As outlined in our Q2 UK Exporter Monitor release last month, this activity sits against a backdrop of lower overall volumes of exports. An increase in the cost of imports against a decline in volumes is putting pressure on what consumers have to pay and adding to the cost living crisis.

“Our latest Exporter Monitor suggests that Northern Ireland’s businesses are remaining resilient in the face of adversity, as exporter numbers continue rise. However, the decline in revenue is concerning. Our members are reporting that because of the global logistics problems it is more difficult to diversify their supply chains, something we are addressing through education and training.

“In partnership with SERC we recently opened an office in Bangor, Northern Ireland, and are already actively helping NI Businesses to grow their international trade.”

Coriolis Technologies Chief Executive, Dr Rebecca Harding said: “UK exporters continue to face difficult conditions. Within this we are seeing regional variations and despite facing additional uncertainties around the NI Protocol over the past twelve months Northern Ireland’s exporters have suffered less than their UK counterparts.

Challenges remain for all exporters and as a result we expect future Exporter Monitors to show a further decrease in the number of UK exporters.”

Exporting employment fell by 2% across the UK since last month. This translates to 319,160 fewer employees compared to June and brings the total to 13,857,628. 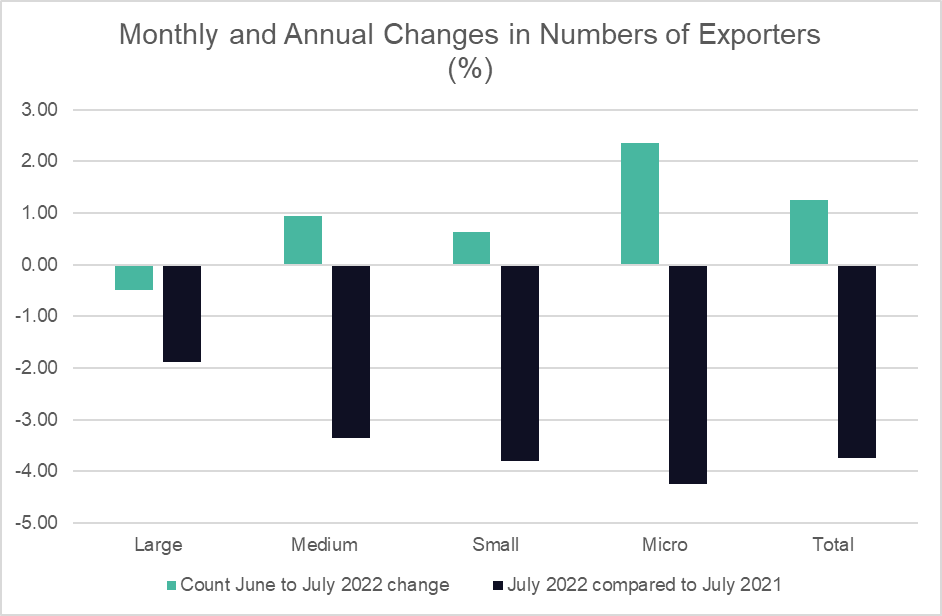 Figure 4: Monthly and annual changes in numbers of exporters (%) 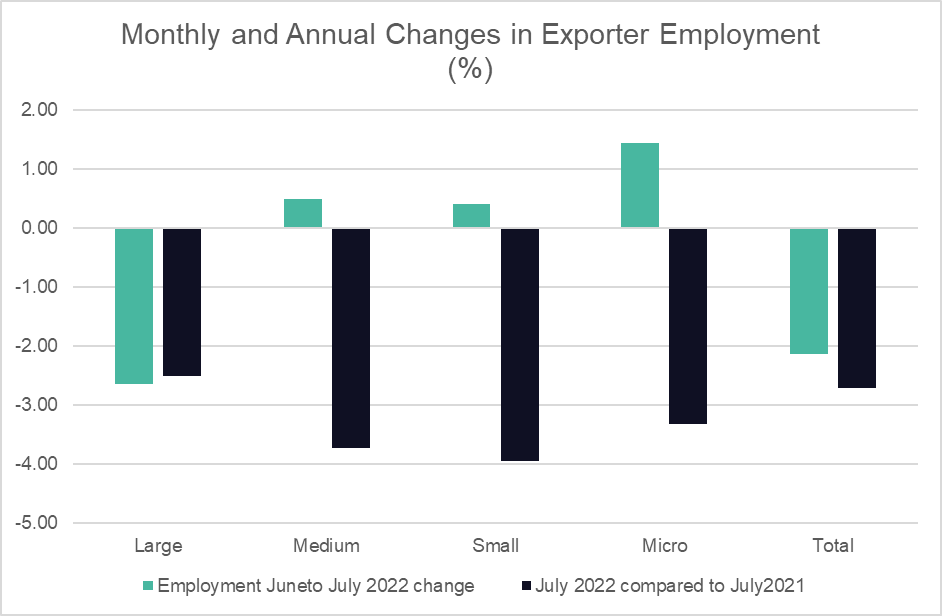 Since last month, micro, small, and medium companies have increased their exporter employment by 1.4%, 0.4%, and 0.5% respectively. Although large companies were the only ones to increase their employment last month, this month they are now the only kind to hire fewer exporter staff (-2.6%).

Next month, we predict a small decrease in exporter counts and a small uptick in both employment and revenue.